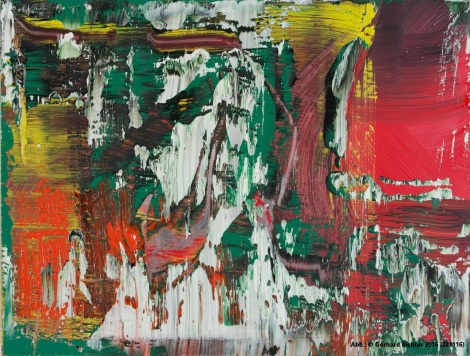 Gerhard Richter is one of Germany’s most famous living artists and is well known for his diverse painting styles. To celebrate his eigh­ty-fifth birth­day, the Museum Ludwig is showing twen­ty-six of his latest ab­s­tract paint­ings for the first time.  Th­e new works, which were paint­ed on can­vas­es, were all created in 2016. The abstract paintings fea­ture bright col­ors and de­tailed, mul­ti­lay­ered com­po­si­tions. The artist used a paint­brush, a palette knife, a squeegee, and a knife to create th­e new canvases which are made up of sev­er­al lay­ers of oil paint.

Just around the corner from the Ludwig Museum, you can see one of Richters most delightful works of art, free of charge and on permanent display. The Cathedral Window in the south transept of the Kölner Dom, consists of approximately 11,500 squares of glass in 72 colors, and was unveiled in 2007. Based on Richters 4096 Colours from 1974, the pixel-like patterns look amazing when the sun shines through them.